http://www.chinchillademontearagon.com/
Visiting Chinchilla is go back in time and meet one of the most charming towns of Spain, declared of tourist interest. Chinchilla 's castle and ramparts, palaces, Arab baths , temples and monasteries.

In the Plaza de la Mancha, are located the most of its numerous, like the two magnificent facades of its town hall . Also you can delight watching the Archpriest Church of Santa Maria del Salvador full of Gothic elements, the interesting Ceramic’s Museum (a large sample of the provincial pottery). Its fascinating castle, protected by a crenelated wall and thirteen towers, and the imposing entrance with a drawbridge. Occupying the bottom of a building with two floors dedicated to housing , we find the Arab baths. The first female institute of Chinchilla was born between the walls of the Convent of Santo Domingo, also known as Church of San Juan Bautista. Another recommended visit is the Convento de Santa Ana, founded on an ancient mosque, there we can find paintings of the eighteenth century. Historic Ensemble declared of turist interest. 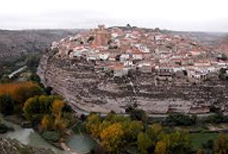 http://www.jorquera.es/
Jorquera, from a cultural point of view, offers us an interesting tourist route, constituted by its main monuments and the remains of the ancient cultures that have marked the municipality.

Transiting between Gothic and the renaissance, we stumbled upon the Church of Sta. Mary of the Assumption, hosting in its interesting interior works as a processional cross of the sixteenth century or a canvas in the contemplation of the body of San Franciso. Among other attractions, can stop to admire the remains of the ancient wall of Jorquera, Almohad construction of XII century. Converted today into an exhibition center, we can find the fascinating White Tower. It was built to keep captive a lady, Dona Blanca, during her kidnapping, and, in turn, this towe was one which defended the entrance to the village.

http://www.alcaladeljucar.net/
Spectacular, exceptional... There are many adjectives that can define the Alcalá del Júcar, it’s beauty requires us to stop and enjoy it.

The most important edifications are the Castle, formed by a pentagonal tower and two circular towers. The Parish church, with a single nave with Latin cross form. The Roman Bridge, was a very important intersection in the Camino Real de Castilla to Levante, whose importance made it become a custom step.

Across the river, on the mountainside, you will see one of the most unusual Bullring.

The caves are also one of the biggest attractions in the area, getting thousands of visitors and curious. The most important is the Garadén cave, it was conquered by Isabel La Católica.

You can continue walking along the hillside, whose peculiar situation allows most of the houses are carved into the mountain.

Three of the most famous caves that can be visited include Devil 's Cave, a very peculiar character and given to portray celebrities who passed through his cave , which can be corroborated contemplating the extensive photo gallery hanging from their walls. The other two remaining caves are the Masagó and Garadén.

http://www.riomundo.org/
Riópar is a historical and cultural center formed by Old Riópar and current Riópar . Probably one of the most beautiful parts of the province. You will find the Nacimiento del Río Mundo. After a tour of the Natural Park of the Feather River Mundo and Sima, we enter a huge valley vegetation in it, the Rio Mundo born. But there is more. The cave of the jets where the river is truly born. To reach it , you have to ask permission to come up with a licensed guide.

http://www.bogarra.es
Nestled in the mountains, also offers several points of interest include Church of Our Lady of the Assumption, located in the heart of the old part of town. Haches Tower, watchtower. The beautiful waterfalls Batan. In the bowels of the mountain you can enjoy watching the birth of Bogarra river. Flirty the Bull Ring, dug into the rock as a Roman amphi-theater. 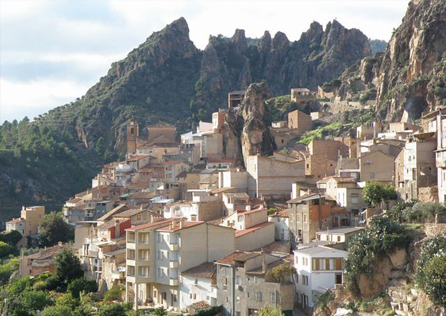 http://www.ayna.es
Also known as 'La Mancha Switzerland', is nestled in the Sierra Del Segura de Albacete in the narrow canyon of the World River. Is interesting to visit 'El Mirador Del Diablo', was part of the movie ‘Amanece que no es poco’. Also ‘Ayna’s Mirador’ and ‘Mirador de los Infiernos’, the latter on the edge of a cliff. The Chapel of Our Lady of Remedies. The Seed of Men. Church of Santa Maria High, temple built on the ruins of a castle. The Balcony of the Mayos, who seems to be hanging on the mountain and offers incredible views of the people. The Cave of the Moors, which was the entrance to the Old Castle Ivy. Following the river we find the World Waterfall Arroyo de la Toba. Do not forget to visit Ayna’s Major Square, whose side is made up of steps, which in turn are an outdoor auditorium.

http://www.elchedelasierra.es
You can visit the Parish of Santa Quiteria, neoclassical influence. La Poza, the appointed place and the most unknown even for elcheños. Balsa Del Pilar, a meeting place for locals, with four spouts pouring clear water. The Concordia Park, the most visited green area and has an important native flora. The Municipal Utility room, which incidentally, is still used. The Alamillo, iconic fountain from which emanates fresh and high quality water. Channels aqueduct that is still in use. The Longuera, lush meadow bathed Segura River. 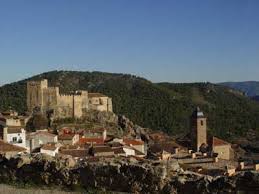 http://www.yesteturismo.com
Noted for its wealth of monuments and its thermal baths. In this place for relaxation and rest, we find the Islamic Castle, the Church of the Assumption, San Francisco Convent and its chapels.

http://www.lagunasderuidera.net/
Natural Park consists of a lagoon system that is high Guadiana Valley and its highest point, the birthplace of the Guadiana river. Ruidera is a cool almost unreal and biologically rich place charming.

http://www.almansa.com
We can discover its majestic castle, but also the beautiful Parish of the Assumption, the Palace of the Counts of Cirat or Casa Grande, the Convent of the Augustinian and San Francisco and a few miles of Almansa Sanctuary Bethlehem is located, with its simple baroque chapel. Among other constructions, Almansa is a pleasant town of great architectural heritage.

For more touristic information about Albacete and village, you can check: